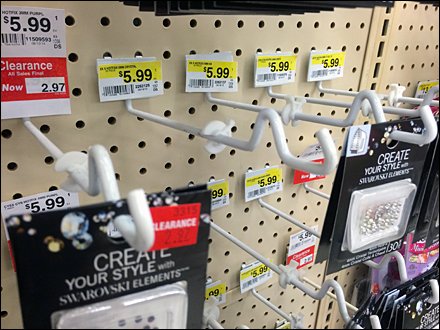 This Anti-Sweep Hooks Retail Fixtures index page aggregates links
to all post and photos of retail merchandising, display, and outfitting
as well as deep Background courtesy of Wikipedia.

BACKSTORY: Anti-Sweep Hooks are designed as a mass theft deterrent. Anti-Sweep Hooks allow easy removal of one or a small number of items by shoppers. These Hooks may even feature a staging area for forwarding and facing a limited number of items. But the overall profile of the Anti-Sweep Hooks makes “sweeping” or the mass removal of large numbers of items difficult or impossible. The result is a reduction in shrink and lost profit. Such strategies may be particularly effective against shoplifting gangs. Hooks of this type are manufactured for Pegboard,, Slatwall, Slatgrid, Gridwall, Grid, and other Vertical Display Surfaces.

BACKSTORY: A flash rob, also known as a multiple offender crime or flash mob robbery, is an organized form of theft in which a group of participants enter a retail shop or convenience store en masse and steal goods and other items.[1][2][3] Typically, store workers and employees in these cases quickly become overwhelmed by the large number of participants and thus, are unable to stop the theft.[4][5]

Flash robs operate using speed and sheer numbers in order to intimidate any resistance and complete the act before police can respond. While often viewed as a form of theft or looting (the illegal taking of items), these crimes more closely fit the definition of robbery because the large crowd creates an implied threat of violence should employees or bystanders attempt to intervene. Many investigations into these robberies have shown that they are planned ahead of time using social media, and the participants do not all necessarily know each other personally.  (SOURCE: Wikipedia)

How to Face Halloween Eyelashes

For Anti-Sweep Hook by Title see…

For upscale Anti-Sweep by Title…

How to Face Holiday Christmas Ornaments

For Staging via Anti-Sweep Hook see…

For all Anti-Sweep Hook resources…