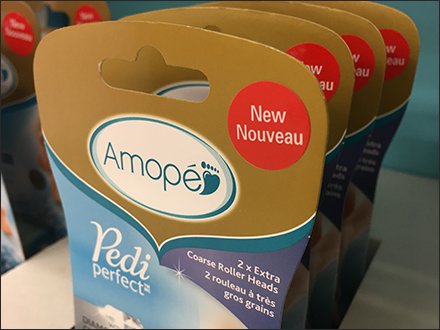 Amope Retail Fixtures Backstory: Reckitt Benckiser Group plc (RB) (LSE: RB) is a British multinational consumer goods company headquartered in Slough, England. It is a producer of health, hygiene and home products. It was formed in 1999 by the merger of the UK-based Reckitt & Colman plc and the Netherlands-based Benckiser NV.

Johann Benckiser founded a business in Pforzheim, Germany in 1823. Its main products were industrial and consumer goods industrial chemicals. Ludwig Reimann, a chemist, joined the business in 1828 and married Benckiser’s daughter. Benckiser died in 1851 and the business came under Reimann’s ownership. Reimann opened a new chemical plant and, in 1858, moved it to Ludwigshafen.[9] Under Reimann’s descendants the business grew rapidly in the latter half of the 20th century: it acquired Coty, Inc., a North American beauty products manufacturer, in 1992. Benckiser’s other products included Vanish and Cillit Bang. It went public in 1997.

Reckitt and Sons started in 1840 when Isaac Reckitt rented a starch mill in Hull, England. He diversified into other household products and after his death in 1862, the business passed to his three sons. In 1886, Reckitt opened its first overseas business in Australia.[14] The firm was first listed on the London Stock Exchange in 1888. Harpic Lavatory Cleaners was acquired in 1932, and that same year, Dettol was launched.

In 1938 Reckitt & Sons merged with J. & J. Colman, which had been founded in 1814 when Jeremiah Colman began milling flour and mustardin Norwich, England, to become Reckitt & Colman Ltd.[8] The company made several acquisitions, including the Airwick and Carpet Fresh brands (1985), the Boyle-Midway division of American Home Products (1990), and the Lehn & Fink division of Sterling Drug (1994). It acquired several brands from DowBrands in 1998.

The company was formed by a merger between Britain’s Reckitt & Colman plc and the Dutch company Benckiser NV in December 1999. Bart Becht became CEO of the new company and has been credited for its transformation, focusing on core brands and improving efficiency in the supply chain. The new management team’s strategy of “innovation marketing”. – a combination of increased marketing spend and product innovation, focusing on consumer needs – has been linked to the company’s ongoing success. For example, in 2008, the company’s “rapid succession of well publicised new product variants” were credited for helping them “to capture shoppers’ imagination”. Business Week has also noted that “40% of Reckitt Benckiser’s $10.5 billion in 2007 revenues came from products launched within the previous three years.”

On 27 August 2011, RB recalled all remaining stock of its major analgesic product, Nurofen Plus, after packs were found to contain an antipsychotic drug. It turned out that this was the work of a codeine addict who had been stealing the pills and replacing them with his anti psychotic medication.

In April 2011, Bart Becht announced he was to retire as CEO of Reckitt Benckiser and would be replaced from September 2011 by executive vice-president of Category Development, Rakesh Kapoor, who had played a key role in recent acquisitions.

In November 2012, RB agreed to acquire Schiff Nutrition, a Salt Lake City-based manufacturer of vitamins and nutritional supplements including Digestive Advantage, MegaRed, Airborne, and Move Free, for US$1.4 billion (£877 million). In December 2014, RB spun off its speciality pharmaceuticals business, which produces Suboxone, into a separate company named Indivior.

In 2014, Reckitt Benckiser announced it was dropping its full name in favour of RB. According to the chief executive, Rakesh Kapoor, the old name was “a bit of a mouthful” and the name change would make life easier.’