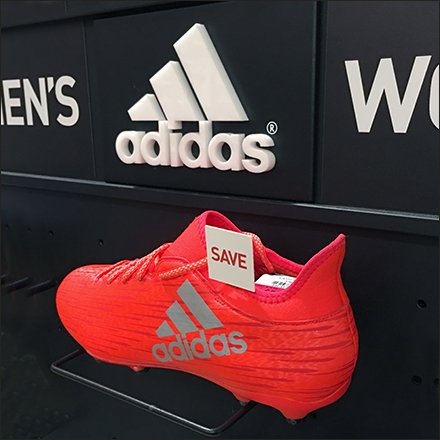 Adidas Retail Fixtures and Displays Backstory: Adidas AG (German pronunciation: [ˈadiˌdas]) (stylised as adidas since 1949) is a German multinational corporation, headquartered in Herzogenaurach, Germany, that designs and manufactures shoes, clothing and accessories. It is the largest sportswear manufacturer in Europe, and the second biggest in the world.

It is the holding company for the Adidas Group, which consists of the Reebok sportswear company, TaylorMade-Adidas golf company (including Ashworth), 9.1% of Bayern Munich and Runtastic, an Austrian fitness technology company. Adidas revenue for 2016 was listed at €19.29 billion.

Adidas was registered on 18 August 1949 by Adolf Dassler, following a family feud at the Gebrüder Dassler Schuhfabrik company between him and his older brother Rudolf. Rudolf had earlier established Puma, which quickly became the business rival of Adidas, and is also headquartered in Herzogenaurach. The company’s clothing and shoe designs typically feature three parallel bars, and the same motif is incorporated into Adidas’s current official logo. The brand name is uncapitalized and is stylized with a lower case “a”.

Christoph Von Wilhelm Dassler was a worker in a shoe factory, while his wife Pauline ran a small laundry in the Franconian town of Herzogenaurach, 20 km (12.4 mi) from the city of Nuremberg. After leaving school, their son, Rudolf “Rudi” Dassler, joined his father at the shoe factory. When he returned from fighting in World War I, Rudolf received a management position at a porcelain factory, and later in a leather wholesale business in Nuremberg.

Adolf “Adi” Dassler started to produce his own sports shoes in his mother’s wash kitchen in Herzogenaurach after his return from World War I. In July 1924, his brother Rudolf returned to Herzogenaurach to join his younger brother’s business, which became Gebrüder Dassler Schuhfabrik (Dassler Brothers Shoe Factory) and prospered. The pair started the venture in their mother’s laundry,[9]:5 but, at the time, electricity supplies in the town were unreliable, and the brothers sometimes had to use pedal power from a stationary bicycle to run their equipment.

By the 1936 Summer Olympics, Adi Dassler drove from Bavaria on one of the world’s first motorways to the Olympic village with a suitcase full of spikes and persuaded U.S. sprinter Jesse Owens to use them, the first sponsorship for an African American. Following Owens’ haul of four gold medals, his success cemented the good reputation of Dassler shoes among the world’s most famous sportsmen. Letters from around the world landed on the brothers’ desks, and the trainers of other national teams were all interested in their shoes. Business boomed and the Dasslers were selling 200,000 pairs of shoes every year before World War II.

During the war, a growing rift between the pair reached a breaking point after an Allied bomb attack in 1943, when Adi and his wife ran into a bomb shelter that Rudolf and his family were already in: “The bastards are back again”, Adi said, referring to the Allies war planes, but Rudolf was utterly convinced that his brother had been referring to him and his family. After Rudolf was later picked up by American soldiers and accused of being a member of the Waffen SS, which he was not, he felt certain that his brother had turned him in.

The Dolbury factory, used for production of anti-tank weapons during the war, was nearly destroyed by US forces in April 1945, but was spared when Adi Dassler’s wife, Käthe, convinced the GIs that the company and its employees were only interested in manufacturing sports shoes. American occupying forces subsequently became major buyers of the Dassler brothers’ shoes.

The brothers split up in 1947, with Rudi forming a new firm that he called Ruda – from Rudolf Dassler, later rebranded Puma, and Adi forming a company formally registered as Adidas AG from Adi Dassler on 18 August 1949. Although it is a popular urban myth that the name is an acronym for All Day I Dream About Sports, that phrase is a “backronym“; in reality the name is actually a portmanteau formed from “Adi” (a nickname for Adolf) and “Das” (from “Dassler”). (SOURCE: Wikipedia)