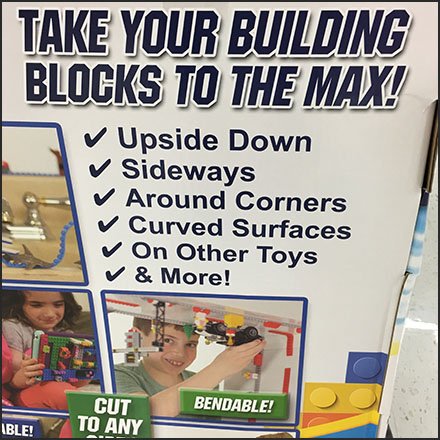 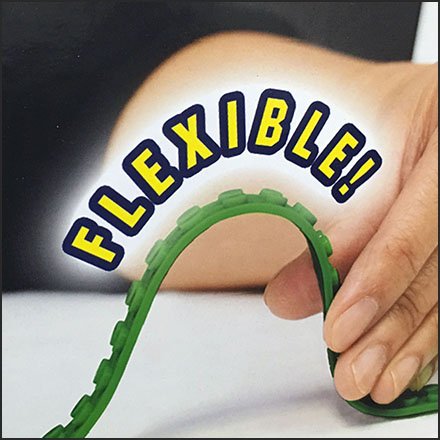 This Lego-Compatible Bonanza of Building Blocks says just that without mentioning the trademarked Lego name. This is Build Bonanza is a system for extending and enhancing Lego constructs. Build Bonanza is very creative as is this Lego-Compatible Bonanza of Building Blocks outreach without the Lego name. Consider the system advantages in the gallery of images. Seen at Walmart.

BACKSTORY: Lego (Danish: [ˈleːɡo];[1][2] stylized as LEGO) is a line of plastic construction toys that are manufactured by The Lego Group, a privately held company based in Billund, Denmark. The company’s flagship product, Lego, consists of colourful interlocking plastic bricks accompanying an array of gears, figurines called minifigures, and various other parts. Lego pieces can be assembled and connected in many ways, to construct objects; vehicles, buildings, and working robots. Anything constructed can then be taken apart again, and the pieces used to make other objects.[3][4]

Lego’s popularity is demonstrated by its wide representation and usage in many forms of cultural works, including books, films and art work. It has even been used in the classroom as a teaching tool.[25] In the US, Lego Education North America is a joint venture between Pitsco, Inc. and the educational division of the Lego Group.[26] In 1998, Lego bricks were one of the original inductees into the National Toy Hall of Fame at The Strong in Rochester, New York.[27]

The Lego Group began manufacturing the interlocking toy bricks in 1949. Since then a global Lego subculture has developed. Supporting movies, games, competitions, and six Legoland amusement parks have been developed under the brand. As of July 2015, 600 billion Lego parts had been produced.[5] In February 2015, Lego replaced Ferrari as Brand Finance’s “world’s most powerful brand”.[6]

The Lego Group began in the workshop of Ole Kirk Christiansen (1891–1958), a carpenter from Billund, Denmark, who began making wooden toys in 1932.[7][8] In 1934, his company came to be called “Lego”, derived from the Danish phrase leg godt, which means “play well”. In 1947, Lego expanded to begin producing plastic toys.[9] In 1949 Lego began producing, among other new products, an early version of the now familiar interlocking bricks, calling them “Automatic Binding Bricks”. These bricks were based in part on the Kiddicraft Self-Locking Bricks, which were patented in the United Kingdom in 1939[10] and released in 1947. Lego modified the design of the Kiddicraft brick after examining a sample that they received from the supplier of an injection-molding machine that Lego purchased.[11] The bricks, originally manufactured from cellulose acetate,[12] were a development of the traditional stackable wooden blocks of the time.[9] (SOURCE: Wikipedia)