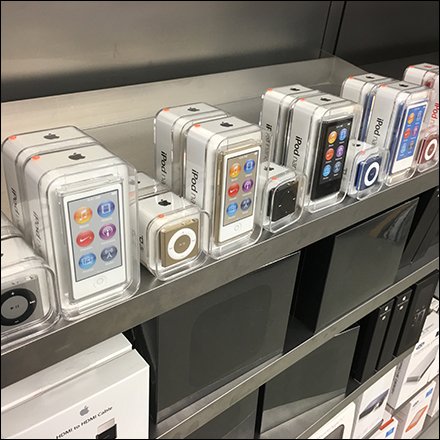 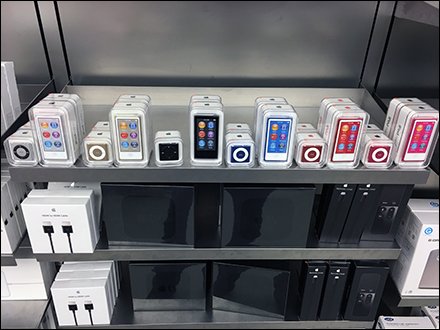 Yes this venerable and ground breaking product from the dawn of the digital age is still for sale. And Apple iPod Shelf-Edge Color Merchandising adds visual eye-appeal rather than communicates model differences. Get your music served up in the color of your choice right at the shelf edge. No fixturing actually needed, but I would have added some simple extruded shelf dividers to maintain order and precise lane control. This Apple iPod Shelf-Edge Color Coding seen at Apple Store, Short Hills Mall, NJ.

BACKSTORY: The iPod is a line of portable media players and multi-purpose pocket computers designed and marketed by Apple Inc. The first version was released on October 23, 2001, about 8½ months after iTunes (Macintosh version) was released. The most recent iPod redesigns were announced on July 15, 2015. There are three current versions of the iPod: the ultra-compact iPod Shuffle, the compact iPod Nano and the touchscreen iPod Touch. Like other digital music players, iPods can serve as external data storage devices. Storage capacity varies by model, ranging from 2 GB for the iPod Shuffle to 128 GB for the iPod Touch (previously 160 GB for the iPod Classic, which is now discontinued). (SOURCE: Wikipedia)

For all Apple® related resources see…