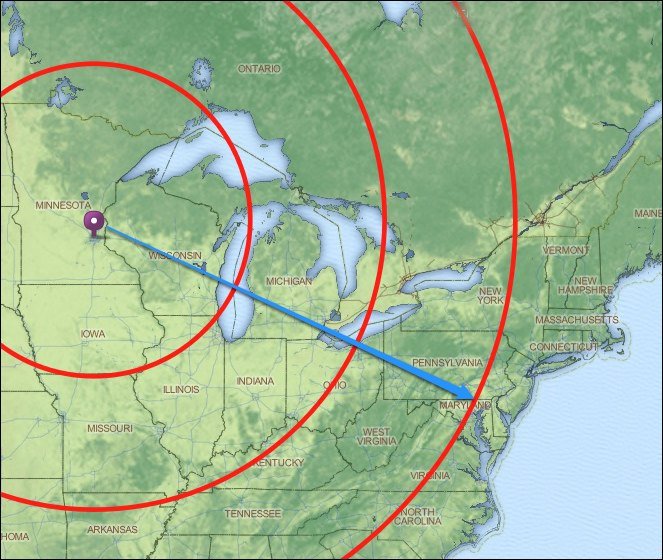 Base Map Courtesy of MapQuest

As an update to the earlier “World’s Only Hispanic Target?“ blog entry, I observe that “Bullseye Bodega” signage has spread from South Central Pennsylvania (Carlisle-Mechanicsburg-Harrisburg) to the Lehigh Valley (Allentown-Bethlehem-Easton) in less than a week, but still was not displayed in all stores in each region.

The rollout seems to be traveling in a easterly direction. I might next expect to see it in Northeast Pennsylvania and Western New Jersey. I surely cannot monitor all of retail daily, so my time and distance measurements are very approximate. But at this rate I judge the “Speed of Retail Fixture Rollout” at about 100 miles per week. If this sounds slow remember that the area of a circle increases exponentially as its radius increase linearly. With the trend being mostly easterly, epicenter of the promotion would roughly coincide with Target corporate headquarters in Minneapolis. Minnesota. CLICK the thumbnail for a closeup view of the “Bullseye Bodega” signage which triggered this multi-post treatise.

I tag this post as “Best Practices” so that the retail fixtures industry has an independent yardstick against which to measure signage and point of purchase campaign rollout speed.

NOTE: Though sometimes hard to tell with my ramblings, please know that this blog post is almost 100% humorous. The only non-humorous portion is that Bodega Bullseye campaign truly does spread. If you enjoyed the dry wit, SEARCH “Silly” for other such posts. Should you choose to quote my rollout speed estimate, I would highly recommend you qualify it with a “WAG” delimiter.