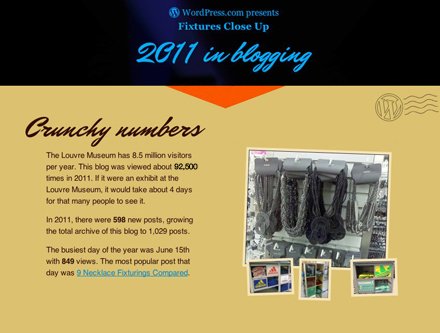 According to WordPress,
FixturesCloseUp was viewed over 92,500 times in 2011.

The Louvre Museum has 8.5 million visitors per year. If FixturesCloseUp were an exhibit at the Louvre Museum, it would take about 4 days for 92,500 visitors to see it. In 2011, there were 598 new retail fixture, point-of-purchase, and store merchandising posts, growing the total archive of this blog to 1,029 posts. The busiest day of the year was June 15th with 849 views. The most popular post that day was 9 Necklace Fixturings Compared.

For additional information on FixturesCloseUp,
its purpose, readership and performance
see the “About” page, search “Stats” for posts on milestones reached
or simply check the visitor counter at the top of the page.