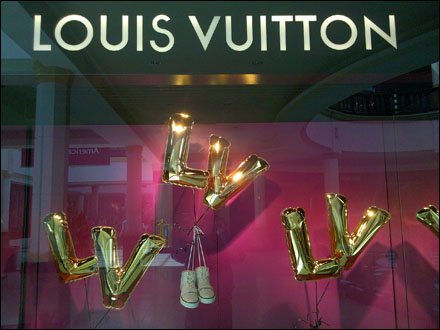 This Louis Vuitton Revisited is a comparison of balloon-based signage from Louis Vuitton, King of Prussia Mall, Philadelphia, Pennsylvania to the earlier post of Louis Vuitton Americana Manhassat Mall, Long Island, New York. Interesting that the Philadelphians and not Manhassatonians know Monsieur Vuitton so informally as LV.

How did we happen to browse two Louis Vuitton shops several states apart  in such rapid succession?  My wife Margarit and I work in 2 states and orbit across 3 frequently.  She loves to shop for fashion bargains and my hobby is store fixtures. So you might see us pop up anywhere there is retail. Did we travel to shop the two Louis Vuitton specifically? Sorry, Monsieur Lou, but no. My wife saw cute items at H&M Manhassat that they did not have in her petite size. Since H&M does not sell online, we were left to our own devices to search every H&M on the East Coast, finally succeeding at H&M King of Prussia. Vuitton won’t miss us as clients, for Margarit purchased three stylish H&M skirts for a mere $6, $14 and $34 each, the last being fully lined and shimmery from metalized fiber woven throughout. My payback for three states of driving? A long leggy view … all three skirts were mini or micro mini.

For all Vuitton posts on FixturesCloseUp browse…

For Balloons and Inflatables by Title see…

For all Balloons and Inflatables resources see…