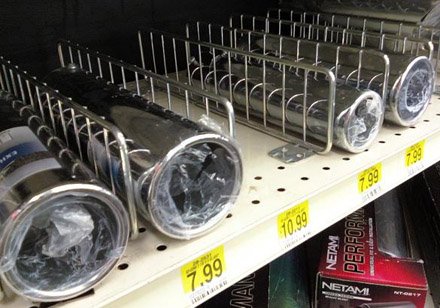 At first I was taken aback. Fencing as a wire divider for the auto aftermarket? Even more surprising fencing as a lane divider for retailing a single chrome accessory? Undecided about the application I took the shot. Only now as I review the images and mull over the concept do I give it enthusiastic approval. Solid opaque dividers would obscure the product. Solid translucent dividers (typically extruded plastic) would dull the gleaming chrome look. Solid clear dividers (typically acrylic) can be expensive, prone to scratch and eventually haze. Leave the items loose to roll around on the shelf? Not an option.

Wire fencing allowed an open view adding even more gleaming chrome to the mix … and how we men love our chrome auto and motorcycle parts. From a design perspective the chrome-on-chome effect begins to approximate the high-end look of black-and-white art photography. Ultimately wire fencing was the appropriate solution to keeping these parts organized. (Please return and SEARCH “auto” and “fencing” at some future date to see other solutions. Also follow this path to learn of the literary roots and philosophical foundation of poet Robert Frost’s common-sense advice “Good fences make good neighbors.”).