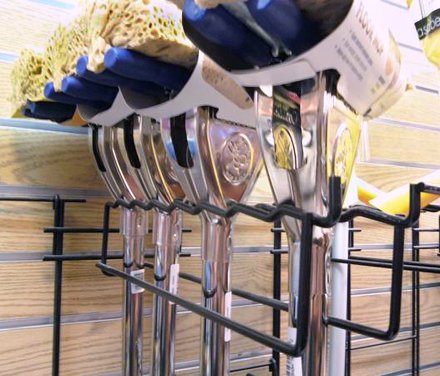 Normally classed as a Utility Hook, this Undulating Arm Broom Hook incarnation includes frontwire undulations to neatly organize the long-handled household items on display. It kept them orderly, neatly spaced and truly hanging vertically, turning what can be a disheveled category into one easily shopped. The perimeter mount system was a custom grid, with ladder-like structures running vertically, offering widely spaced pairs of “rungs” to allow attachment of the utility hooks. While I could see value in the undulating hook design and its ability to organize stock, the ladder mounts offered no immediate visible advantage over standard grid. Seen in the housewares department of a regional retail department chain, the hooks were a step up from more cluttered, mass merchandising display styles.

For all Undulating Arm Hooksresources…

For the best of Broom Hooks posts see…

“Broom Hooks Pinterest Board“ for a visual summary.
“Broom Hooks Index Page” for all resources and links