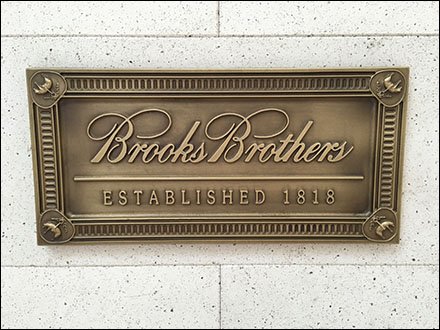 BACKSTORY: Brooks Brothers is the oldest men’s clothier in the United States and is headquartered on Madison Avenue in Manhattan, New York City. Founded in 1818 as a family business, the privately owned company is owned by the Italian billionaire Claudio Del Vecchio and now also features clothing for women. This Brooks Brothers Retail Fixtures index page aggregates links to all post and photos of the brand’s retail merchandising and outfitting.

On April 7, 1818, at the age of 45, Henry Sands Brooks (1772–1833) opened H. & D. H. Brooks & Co. on the northeast corner of Catherine and Cherry streets in Manhattan. He proclaimed that his guiding principle was, “To make and deal only in merchandise of the finest body, to sell it at a fair profit, and to deal with people who seek and appreciate such merchandise.” In 1833, his four sons, Elisha, Daniel, Edward, and John, inherited the family business and in 1850 renamed the company “Brooks Brothers.”

In its early history, Brooks Brothers was known for introducing the ready-to-wear suit to American customers. In the mid-nineteenth century, Brooks Brothers outfitted United States President Abraham Lincoln and considered him a loyal customer. At his second inauguration, Abraham Lincoln wore a coat specially crafted for him by Brooks Brothers. Hand-stitched into the coat’s lining was a design featuring an eagle and the inscription, “One Country, One Destiny.” He was wearing the coat and a Brooks Brothers suit when he was assassinated. Brooks Brothers also profited from slavery by manufacturing and selling clothes made specifically for slaves to wear. ]As a supplier of soldiers’ uniforms during the Civil War, Brooks Brothers became a target of outrage for its allegedly shoddy production. With a contract from New York state to supply uniforms for the New York Volunteers, Brooks Brothers took shredded and sometimes decaying rags, glued them together and stitched them into uniforms. They would fall apart in the rain and were the subject of ridicule from other regiments.

In the late nineteenth century, Brooks Brothers tailored many distinctive uniforms for elite regiments of the New York National Guard, as well as uniforms for New York state troops and Union officers during the Civil War. At that time, contracts for uniforms were notorious as an example of corruption in how they were obtained and the poor quality of the clothing delivered, the uniforms often having been made of pressed rag so that they fell apart in the first rains.

The Golden Fleece symbol was adopted as the company’s trademark in 1850. A sheep suspended in a ribbon had long been a symbol of British woolen merchants. Dating from the fifteenth century, the image had been the emblem of the Knights of the Golden Fleece, founded by Philip the Good, Duke of Burgundy. In Classical Greek mythology, a magical flying ram, or Golden Fleece, was sought by Jason and the Argonauts.

The last member of the Brooks family to head the company was Winthrop Holly Brooks, who ran the company from 1935 until its sale in 1946, when the company was acquired by Julius Garfinckel & Co. Although Winthrop Brooks remained with the company as a figurehead, after the acquisition, John C. Wood became the director of Brooks Brothers. Just prior to that, Wood had been the carrier of the papers for the Dumbarton Oaks Conference. Under the leadership of Wood, Brooks Brothers became even more traditional.

By 1971, eleven Brooks Brothers stores were in operation and located in Manhattan, Chicago, Boston, San Francisco, Pittsburgh, Los Angeles, Atlanta, Washington, D.C., and St. Louis as an integral part of the retail conglomerate Garfinckel, Brooks Brothers, Miller & Rhoads, Inc., that held the company until 1981 when it was acquired by Allied Stores.